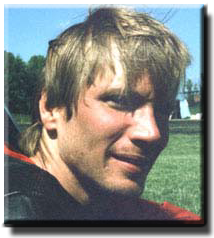 Hi! I'm Jim Irwin. If your're looking for my commercial site it's right here. Otherwise, I'm here to tell you things you never wanted to know about me. The photo at left is a couple years old, but the only one I have that really shows my face. If I look a little tousled it's because that photo was taken shortly after removing a helmet and chain mail after a vigorous sparring match with a broadsword-wielding friend of mine. I won't say who won that match, although some additional photos below may give you some clue. If your browser is set up to play MIDI files you should be hearing an original jazz composition of mine. That was written back in high school (and I won't say how long ago that was!), and I finally got around to creating a MIDI arrangement in 1996. If you find that interesting, be sure to check out my music page. The rest of this page should give you some idea of what I'm all about. I won't clutter my page up with construction signs, but keep in mind that my page (like my life) is a work-in-progress. In the time since I wrote the original version of this page I've learned a lot more about web design, and my hobbies have expanded a bit. I used to spend a lot of time with a science fiction fan club, later became almost obsessed with historical reenacting, bought a house and became nearly obsessed with home improvement, then became nearly as obsessed with databases and web design in general (and a specific internet puzzle site in particular), periodically fall back upon my love of music, now and then fancy myself as a writer, and most recently have started home-brewing my own beer. Currently I'm working on winning the lottery so I can retire early and devote the rest of my life to finding out what I really want to do. 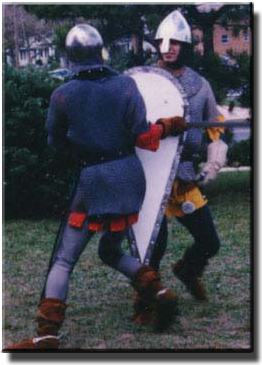 My most dramatic hobby is historical reenactment, and as a result I've died quite a few times. The earliest period I have reenacted so far is a Norman Knight, sometime in the tenth century. The garb illustrated here is not the most historically accurate, and has since been recycled into a Knights Templar impression. At left I am sparring with my buddy Daren. We're not really trying to kill each other, but it sure felt like it. If you ever have the opportunity to spar with Daren (with or without blades and shields) keep one thing in mind: Daren does not often lose. The match is concluded in the next image - in case you hadn't figured it out yet, I'm the dead knight in red. I don't do as much sword work as I'd like to, but at this point I think I need a bit more formal training, and I really need to start working out to build up my upper-body strength. In the meantime the sword, shield, and chain mail reside in the "retro room" in my house waiting for a chance to come out and play. 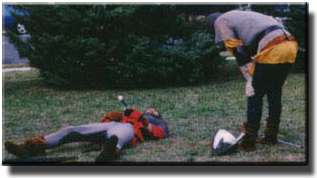 Given the uniform (or civilian attire, though I haven't done much of that) I'll reenact anything once. Most of my reenacting has been portraying a British soldier during the French and Indian War (often abbreviated "F & I"). For a brief time I was a lieutenant commander in the Union Navy during the American Civil War (sometimes abbreviated "ACW"). I've reenacted a rifleman of the British 95th Rifles (familiar to anyone who has seen the "Sharpe's" series) during the war of 1812. During the American War for Independence (sometimes referred to as the "American Revolution" or "Revolutionary War" and even shortened to "Rev-war") I have served with the British 2nd Regiment of Dragoons, Light Troop (always dismounted since I don't own a horse). Lately if I reenact Rev-war I am more likely to appear in hunter garb as a civilian scout, usually portraying my character as a former British soldier who was released from service after the F&I reluctantly joining into this new war. The nice thing about going in civilian garb is that I can scout for either side depending on who needs bodies more at an event.